op juni 01, 2019
Thanks to all the mothers. I saw so many great things on my fb. I am happy for all the mother’s bless you  and your beautifull children.

We have soo many great kids who come to our restaurant. I really see them grow up, cause their parent comes regularly. When they come I feel very happy to see them grow up in a good way.

We had a great mothersday. Quite busy saw a lot of happy mothers. As it should be. My team did a great job althought we were short of experienced staff.

Thank you guys you all did great. 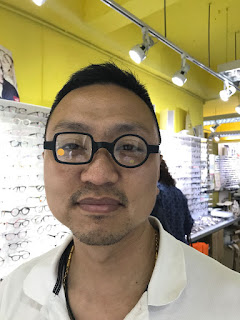 Life of a restaurant owner.

My name is Kelvin Wong, as I pronounce W  O  N  G.  I am a restaurant owner in the Netherland. My specialization is Japanese Cuisine.
I am also chef and I can say , I am a passionate chef, I love to cook , I love to eat and I love to share. So I start with my story; Life of a restaurant owner.
You always hear people saying ; today is just another day. As for me everyday is a different day.
I find myself very philosophical, I dig in everything as deep as I can go. Once someone said we are a lifetime trainee, we learn everyday. I certainly agreed on that, but it is just that not everyone can do that!  Many stopped learning when they start to think they know how to .....
They do not have to urge to upgrade him/her-self anymore so they stopped. May times I have met or worked with these peoples. Those who stays in the same spot as they began. I ... really feel sorry for them, cause there's so much more in life , to learn , to go for and also beside work.
Like writing a blog. Never thought… 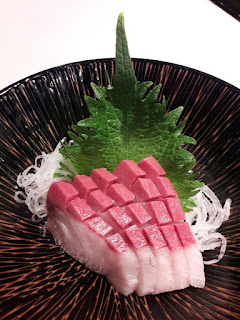 Today I started with a new colleague. We had a pretty rough week, with some problems with one of my female employé. The result was that she had to take a "BREAK" So it was a bit difficult to get my workschedule fullfilled. Luckily we managed, all of the remaining staff had to work more and make more hours. I wanted the new colleague to get fast on track so I started with her today and guide in person.

She's a mature women , hard worker with great social skills. My customers likes her already! , that relieves me a lot.

Then this American lady,  who came in as my first customer of the day. She was longing for our Hamachi she said. According to her ; our Hamachi is the best she ever tasted. Well I thought , I thought , I thought ......I forgot what I was thinking. Oh yes , I was thinking ; WHY....'cause I know that my suplier get the fish from an importer. And all the supliers in Holland gets their hamachi from this importer. 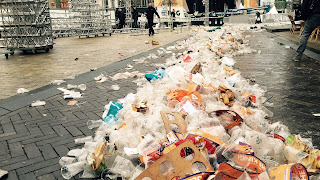 That's it,  finally Kingsday is over. Worst days of the year. It used to be one of the highlights of the year.
Sometimes I really feel ashamed of the Dutch people, when they have little booz, they get annoying. Especially at the celebration of our King, They behave like animals pissing just in the middle of the street leave rubbish everywhere, just terrible.

You should see the street in the morning, it's like an alien invasion.

Happy it's over, now we can come back to humanity.  Next event is Liberation day, that is much better I hope , it used to be much better.